Crisis At Christmas - Drop Off Points

This year Crisis at Christmas in Newcastle will welcome over 300 guests who are homeless, lonely or otherwise isolated to our Christmas Day and Boxing Day event.

Please help us in your shopping today by purchasing an extra item in store from the list below.  Once we receive all the donations our guests make up their own gift box (of approximately 10 items) to ensure everybody can get food / gifts appropriate to their needs and tastes.
*Left over items will be donated to a local charitable organisation supporting people in food poverty.

As you may have already seen we have decided not to run a WCA campaign this year. This decision has been taken after much deliberation and in truth with a bit of a heavy heart but for all the right reasons.

Some of you might remember the reason we set up WCA was due to the fact Crisis (Newcastle) had lost their main source of clothing for Crisis at Christmas and with the help and support of a few individuals Winter Coats Amnesty was born in October 2011.

WCA has grown year on year due to your support and kindness to the point last year we received somewhere in the region of 7 tonnes of donations! It’s very hard to visualise that amount of clothes however I can assure you it’s about the size of a small mountain!

When we started WCA it was the only source of (free) warm clothing for the guests of Crisis but the emergence of numerous food banks (a sad reflection of where our society is at the moment) and other organisations has meant that there are more options for people in need of clothing at any time of the year. Surplus donations from WCA  have been going to a City Centre food bank for the last 3 years which inspired them to run a clothes bank alongside their food bank and I guess this has to be seen as part of the legacy of WCA.

We have always thought WCA would have been better if it was accessible from October or November onward rather than just for a couple of days in December but the limitation of storage and time have meant this is not something we could commit to. We approached a local charity this year who we thought would have been a great delivery partner but sadly this came to nothing.

This decision has been made after discussing the situation with Crisis and with their full support. You can still make donations direct to Crisis in Newcastle and we will soon publish a list of items they require as they have a very long list to make Crisis at Christmas a success. If you still want to get involved with making donations to Crisis then the contact details are here, however due to restrictions of storage they won’t be able to accept donations until December.

We are not saying that this is the end for WCA far from it, we are taking a year out to reflect, evaluate and redesign WCA. We are confident that the guests of Crisis are getting the support they need and you can still be part of this and we will let you know how when we have that information.

Thank you for all your support.

This is a short film shot last year at Crisis at Christmas, it explains what we do and why we do it.

Huge thanks to Hannah Bayman for filming, editing and doing everything else to make this film possible.
Posted by andyb at 12:19 1 comment:

Where Can You Drop Off Donations?

Donations can be dropped off between the Monday 3rd November and Friday 12th December at most of the drop off points listed below, but some may finish earlier so please check with the drop off point prior to making your donation for example The Co-operative Stores will be taking donations until 5th December.

Please note Co-operative Stores will only start accepting donations from the 17th November.

We are asking for all donations to be dropped off as early as possible but at the latest by the 12th December as this will give us enough time to sort the donations prior to Christmas Day.

In the past this has been a monumental task that we haven't left ourselves enough time to do so this year Crisis are looking for volunteers to get involved sorting the clothing throughout December. If you have a few hours to spare and want to get involved please contact Adrian Conway the Christmas Co-ordinator at Crisis on adrian.conway@crisis.org.uk

The drop off points are listed below and where possible I have supplied links to their websites so you may check opening hours etc.

Please note Creative Up North will be accepting Donations until the 1st December.

Will be accepting donations up until the 5th December.

Will be accepting donations up until the 5th December.

* Cool Designs Will be accepting donations until the 7th December.

*De Niros will be accepting donations until the 5th December.

The Co-operative Stores have very kindly offered 40 of their stores to be drop off points and they are also raising money for Crisis throughout December which is brilliant.

The Co-operative Stores will be accepting donations from the 17th November until the 5th December.

Below is a list of the types of items we need in order to make Winter Coats Amnesty a success and help the guests of Crisis at Christmas.


All the guests at Crisis at Christmas are over 18 and are mostly single so we don't have the need for children's clothes. We have both male and female guests and they are aged between18 and 80, so we are looking for donations suitable for all ages.

We require the donations to be in good repair and to be clean please. We don't have to resources or the funding to have things cleaned or repaired so please think about this when donating.

The donations you give make a huge difference to the guests of Crisis and it goes without saying that we couldn't do this without your support!

Help Us To Help Others By Donating Your Unwanted Winter Clothing 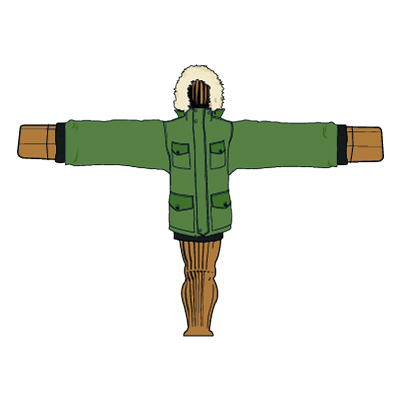 
The Winter Coat Amnesty was born in November 2011, as a result of a conversation between two friends who managed to galvanise and scramble some last minute support from their friends and colleagues from the local business community, and two became five! Now the Winter Coat Amnesty is up and running, we are back down to two, but our 2011 founding family are always close by, and on hand.


The reason for that very first conversation was as a result of a fleeting remark made by a Crisis member of staff to Andy – Crisis weren’t going to be sent any coats this year from HQ to distribute to the guests who use the Newcastle Crisis Centre when it opens over Christmas.


Andy was already a regular Christmas at Crisis volunteer and appreciated how much the lack of a clothing department would impact on the regions homeless, vulnerable and isolated and so he set to work and as a team, we’ve never looked back. Andy met Claire whilst volunteering for Crisis before the inception of the Winter Coat Amnesty and they’ve been friends ever since, but they’d rather not dwell on how many years ago that was!


We are not Crisis, a charity or a constituted voluntary organisation – and we never have been. There have been just two of us since 2012, but our number occasionally fluctuates for a while, when we call on one of fellow founders to help us with something specific.The Winter Coat Amnesty does not profit (in fact, we don’t even have a bank account!) and every single piece of clothing is distributed to Crisis guests at Christmas, with any surplus stock donated to local charities who support local homeless and vulnerable people. We do it for free because we care and our volunteering at Crisis at Christmas enables us to see how much it benefits others. This is a campaign run by local people for local people which is one of the reasons  why we think it is so successful.


Our first ever Winter Coat Amnesty in 2011 got off to a flying start. We had lots of support from the local media, but we basically ran the campaign using Facebook and Twitter. When local businesses heard about us, many offered to act as donation stations which meant we had a small army of willing businesses across the region, so people could drop off their unwanted, warm winter clothing. We were astounded  to have collected and gone on to distribute approximately 500 items of unwanted warm winter clothing to the regions homeless and vulnerable that year – not bad given we pulled it all together six weeks before Christmas!


In 2012, the Winter Coat Amnesty turned in to a monster, albeit a friendly one! The number of businesses prepared to act as donation stations increased as did our workload, and at times we found ourselves trying to juggle our equally demanding full time jobs, with travelling around the corners of the region to pick up unwanted winter clothing and delivering them to Crisis in Newcastle City Centre . As ever, the local media were generous to us and as a result of everyone pulling together, the region’s homeless were rewarded with many thousands of items – it really was a sight to behold.

2013 was even bigger, we received an unprecedented number of donations with 1000's of donations being received. As you can see from the pictures we had an unbelievable amount of clothes and again the clothes bank was really popular with all the guests.
So What About 2014?
We are ready with your help to go again for Christmas 2014. The number of people visiting Crisis at Christmas increases every year and we don't expect this to be any different this year.Again we need your help this year in order to help the guests of Crisis.
We have opened this page as it allows us to give you more information but we have a Facebook page and a Twitter account where we give regular updates, so if you use these platforms and haven't already head across and give us a LIKE or a FOLLOW.
We are finalising the drop off points at the moment so will give you details in the near future but in the short term if you are having a tidy up of your wardrobe out to make space for your new winter purchases think Winter Coats Amnesty before you throw them out.
Posted by andyb at 07:56 No comments: